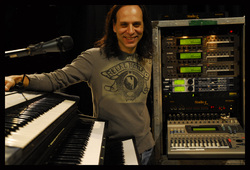 Canadian born Yves Frulla is an internationally acclaimed songwriter, producer, and keyboardist. Well known for his accomplishments as keyboard player for Celine Dion, Mr. Frulla has also recorded and toured extensively with renowned Canadian artists including Sass Jordan, Julie Masse, and Sylvain Cossette. Yves Frulla’s talent and versatility have fueled his rapid rise within the music industry; however, his unique background extends beyond the pop/rock world.

Yves Frulla’s has musical roots in classical piano. Attracted to contemporary music, he started playing in bands during his early teen years and later attended McGill University, where he studied general musical performance. His career path branched out in a new direction in 1986 when he received a Bachelor of Pharmacy from the University of Montreal. Concurrent with pursuing his music, he spent 20 years in the pharmacological field and provides freelance pharmacy care in his native Quebec today.

While performing in her Caesar’s Palace show A New Day, he ran his own project studio, which he still operates today. While committed to the successful show, he found time to produce arrangements for other artists. As part of Ms. Dion’s current Las Vegas show, Mr. Frulla still frequently commutes to Las Angeles and Nashville.

Following the close of A New Day, Yves Frulla set out on world tour with Celine Dion in 2008. In addition to playing in countless sold out shows, he recorded three live albums with Celine Dion and appeared with her on many television shows, including David Letterman, Jay Leno, Arsenio Hall, and Oprah Winfrey.

Covering the spectrum of composing and producing music for a range of artists and songwriters, Yves Frulla has also done work for television and film. With more than two decades of achievements behind him, he plans to continue expanding his musical pursuits in the future.